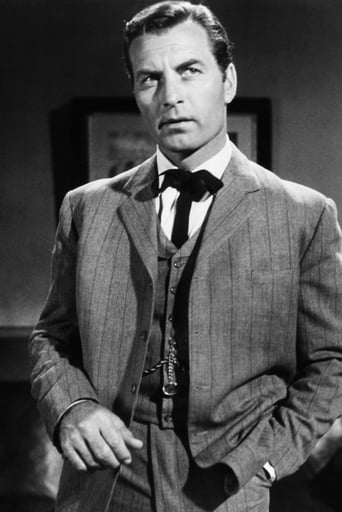 George Montgomery was boxing champion at the University of Montana, where he majored in architecture and interior design. Dropping out a year later, he decided to take up boxing more seriously, and moved to California, where he was coached by ex-heavyweight world champion James J. Jeffries. While in Hollywood, he came to the attention of the studios (not least, because he was an expert rider) and was hired as a stuntman in 1935. After doing this for four years, George was offered a contract at 20th Century Fox in 1939, but found himself largely confined to leads in B-westerns. He did not secure a part in anything even remotely like a prestige picture, until his co-starring role in Roxie Hart (1942), opposite Ginger Rogers. Next, in Orchestra Wives (1942), he played the perfunctory love interest for Ann Rutherford -- though both, inevitably, ended up playing second trombone to Glenn Miller and His Orchestra. In 1947, George got his first serious break, being cast as Raymond Chandler's private eye Philip Marlowe, in The Brasher Doubloon (1947). Reviewers, however, compared his performance unfavourably with that of Humphrey Bogart and found the film 'pallid' overall. So it was back to the saddle for George. Unable to shake his image as a cowboy actor, he starred in scores of films with titles like Belle Starr's Daughter (1948), Dakota Lil (1950), Jack McCall Desperado (1953) and Masterson of Kansas (1954) at Columbia, and for producer Edward Small at United Artists. When not cleaning up the Wild West with his six-shooter, he branched out into adventure films set in exotic locales (notably as Harry Quartermain in Watusi (1959)). During the 60's, he also wrote, directed and starred in several long-forgotten, low-budget wartime potboilers made in the Philippines. At the height of his popularity, George attracted as much publicity for his acting, as for his liaisons with glamorous stars, like Ginger Rogers, Hedy Lamarr (to whom he was briefly engaged) and singer Dinah Shore (whom he married in 1943). After his retirement from the film business, he devoted himself to his love of painting, furniture-making and sculpting bronze busts, including one of his close friend Ronald Reagan.